What is concept art? 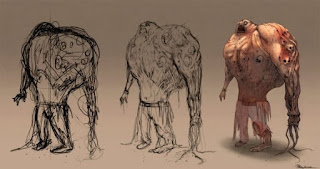 Concept art is a form of illustration, usually print media such as drawings or paintings, that convey an initial idea for use within a video game. This includes things such as the main character(s), enemies and environments within the game. Often referred to as visual development, the artists will use the story and characters that have been created for the project as a guideline in order to build a basic concept for how the game and the characters should look, based off of the initial feel of the game that they have gotten from the early story ideas and concepts. Furthermore, not only is the story what the concept art is based on, but the concept art that is created can also relate so strongly to the feeling of the world that the concept art can help to shape some story elements by them being based off the concept art themselves.

Use of Concept Art in Games 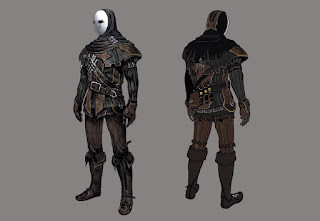 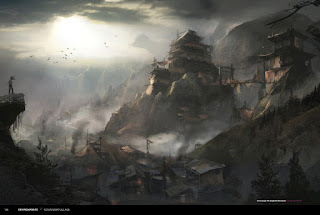 This is the background concept art for one of the areas in Tomb Raider. It uses a lot of darker colours which helps to emphasise the sunlight in the background of the village and the mountains, and this contrast helps the poor state of the village to stand out in the concept art, which helps to highlight how bad the condition of the village is.  This helps to give the impression that this area of the game is particularly desolate. In addition to this the use of the faded colours on the metals helps to give an age to the area, making it seem like it's been there a long time, especially on the upper right buildings in which the yellow walls are now fading to brown, and are now stained and dirty. This helps to show how old the area is, and it makes it feel like it's been untouched for a while as no one has tried to fix it up, almost like it has been abandoned.   Furthermore, this is also highlighted by the makeshift houses made from scraps of metal and ripped cloth sheets. This helps to show that the area is very isolated from other places and is also very poor as they don't have any proper housing, perhaps showing that this is a makeshift village that has been created because the inhabitants don't have anywhere else to go. This is further shown by the use of lighting from lanterns and torches which shows that there is a lack of electricity which fortifies the fact that the area is very isolated compared to the rest of the world. Finally, the style of the buildings in the upper right of the image help to give an idea of the time period which the buildings are based on, with them having a Japanese style of architecture. When looking at the image it gives off the feeling of isolation, but also that there is some hope, shown through the use of the sunlight coming through the clouds. The style of the art is very realistic, which for game such as Tomb Raider is very suitable as the game is all about and adventure throughout the world, therefore making this art style great for showing the different areas in the world in as much detail and as accurately as possible. 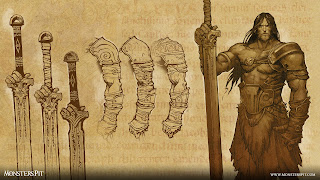 This is some character concept art created by Monsters Pit, a creative studio based in Madrid that has worked on games such as Castlevania: Lords of Shadow 1&2 and Runaway: A Twist of Fate. From looking at this concept art it is clear that this is some concept art for a character that is based on barbarians, maybe for a fantasy game of some kind. This can be seen from the type of clothing that the character is wearing as he is not wearing much armour, yet is clearly dressed for battle, which was common with the theme of barbarians and the way they fought and dressed. Furthermore, the use of materials on the clothes shows that the character is based in a time that is from a long time ago as his clothes are made from leather and animal fur, or that the character lives in areas that aren't as technologically advanced as some other places. The use of swords for weapons helps to give off a medieval of fantasy feeling to the game, especially with the engravings on the blade of the sword, and also the intricate design of the hilt for the sword. The characters face looks fierce and angry, as if to show that he has no fear and is ready for battle. The style of the concept art is fairly realistic with the character and the armour that he is wearing being made to look as correct as possible for the genre of game that is being created, probably taking inspiration from images and stories of real barbarians from time periods such as ancient Rome and Vikings. The colouring of the concept art gives it an old feeling, like the image has been worn away, which again gives the feeling that the game will be based in an older age, of in a fantasy setting. This image also shows off the stages of creating concept art as it shows the progress when creating the weapons and arm design of the character, with each design changing until it gets to the finished piece which can be seen on the final character design. 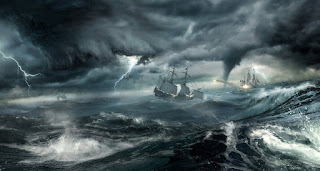 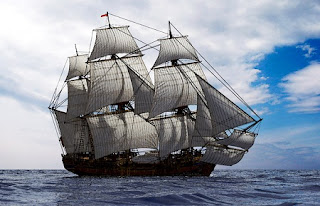 This is some environmental concept art by Edvige Faini, an Italian concept artist and environmental designer. The art shows ship fight in a stormy sea, which is drawn in a very photo realistic art style, with a feeling that some of the inspiration for the image comes from pirates and that time period. The white flashes of lightning help to accentuate the darkness of the clouds and give the feeling that there is a lot of danger in in the image. Furthermore, the white sea foam gives a stark contrast to the blackness of the sea which gives of a sense of the unknown to the sea, as if that if you were to fall in you would be lost forever to it's depths. Overall, the image is very dark due to the stormy nature of the  The architecture of the ships help to give off the feeling of the fact that this is an era where pirates ruled the seas and that a lot of the fighting was done in the sea using cannon fire. It helps to give off a sense of fear for the ocean in that it could take your life at any time from just a large wave or a strong gust of wind. The ships help to show the danger of the stormy nature of the image as
there are rips and tears in the sails, which may have been caused by the weather, but may also have been caused by the fighting between the two ships. The designs of the ships are very reminiscent of the 18th century, which was the golden age of piracy in the Caribbean, which again highlights the feeling that this concept art is inspired by piracy and that time period.

1. When creating concept art, the artist will start by making a rough sketch of their ideas, usually colourless, making many different mock ups of different ideas that they have for the game.

2. These designs and drawings are then presented to the production team in order to show them the different ideas that they have. The teams then decide which designs, if any, they like.

3. At this point the artists take these chosen images and begin shading and refining the images, along with providing colouring to the images to give them much more detail and make them look the best that they can be,

4. The artist will then add the outlines to any other objects or creatures within the scene, along with clothing for characters and extra details such as scales and fur for animals and other creatures.

5. Finally, the artist will add atmosphere to the concept art through different colouring and shading, and then making the important parts of the image stand out the most.

These enhanced images are then presented to the project leader and the rest of the team, where the most appropriate is chosen to be used within the game. This design is then created within 3D modelling software for use in the game.