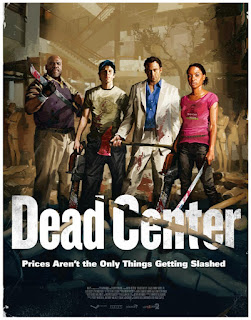 A piece of media text is a form of media that can be viewed and examined by the public. This can include mediums such as movies, newspapers and magazines, to name a few. Left 4 Dead 2 had a large advertising campaign that was worth around $25 million. This was spent on having trailers and advertisements, usually aimed at time slots between sports and lifestyle programming, in order to hit their target demographic when advertising and help to increase exposure to the product (https://www.youtube.com/watch?v=YqBBet5qW8E). A lot of the advertisement was also done through the use of posters that represented each of the campaigns that the player would be playing through. 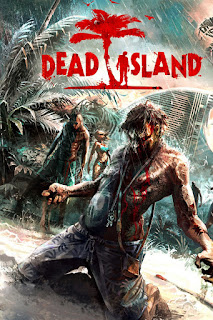 In comparison to this, the advertising campaign for Dead Island made use of the PlayStation 3’s social gaming network, PlayStation Home, in which users of the network could pre-order the game from a special kiosk that was set up specifically for this purpose. Furthermore, the central meeting point for PlayStation Home was redesigned for this promotion and also added a mini game and cosmetics for users Home avatar. This would have been a huge help for marketing as it meant that players that used the network were always under the advertisement of the game, and would have helped people who weren’t aware of the game to find out about it easily and become involved in the hype surrounding the game. However, this was only available on the North American version of the network, and people who weren’t a fan of the changes probably would have been put off to buy this game. Dead Island also released a four part series of comedic short films, along with a novelisation of the short films, which may have helped people who consume these types of media to become more interested in the game who may not be the most interested in these types of games, but were hooked by the stories told in these types of media. Finally, the trailer for this game won multiple awards and helped to spark public interest in the game. (https://www.youtube.com/watch?v=lZqrG1bdGtg&t=8s)

For my Killer Klown game I would create a trailer and have it play as a Youtube advertisment before videos based around video games or clowns due to the fact that Youtube is now a huge medium and consumed by a lot of the target audience that we have aimed at, and by aiming the advertisements around these types of videos it will ensure that the viewers of the adverts will have some kind of interest in these topics. Furthermore, due to the fact that this is going to be a PC specific game, I would try to get it advertised on Steam, as this is where the majority of PC games are sold, and it would help to get an advert in the place where most of the games consumers would be.

In terms of video games, the genre is the type of game that has been created. In the medium of video games, there are many different types of genres, which means that it is very easy for someone to find a genre that they are comfortable with, and then play the games that fit under that genre. Genres can range from First Person Shooters and Action genres, to genres such as puzzle and simulation games. This can also be broken down into sub genres for each genre, such as action stealth games compared to action fighting games, which allows people to pick and choose what games they, very spcifically from what they enjoy. Games can also fit into multiple types of genres, such as Left 4 Dead 2 and Dead Island which are both action games, but due to the content involved, can also be viewed as horror games as well as being survival games. The game that I am creating is very similar in terms of genre to both of these games as it focuses on being a horror game with action elements.

This entails what kind of content is put into a game, and also why have they decided to include this within the game. This is mainly focused on the colour scheme of the game, visuals and sounds used and also smaller content such as the fonts used in writing within the game. For both Dead Island and Left 4 Dead 2 it is set in a zombie outbreak for a post apocalyptic world, although the colouring for each game is a very contrasting due to the fact that the settings are massively different. For Left 4 Dead 2 the game is generally set in the dark city based levels, moving though buildings and streets for the most part, where as the setting for Dead Island is a tropical island that has a zombie outbreak, which leads to a lot brighter colours in terms of the scenery, especially for the first part of the game where you are by the beach. My game is much more comparable to that of Left 4 Dead 2 as I have put a lot of focus on the darkness within the game and trying to make it is scary as possible to the player.

The construction of content is taking the content that has been picked to be included in the game and then setting out in a way that makes a compelling game. The two games that I have chosen differ slightly in the way that they are constructed as both are level based, although Left 4 Dead 2 is much more linear where as Dead Island has a lot more exploration and side quests to do, whereas Left 4 Dead 2 just has the main mission to complete as you make your way through the level. My game is very much level based in the same way as Left 4 Dead 2, with emphasis on exploring the level that you are in in order to be able to find collectables and weapons in order to make yourself stronger in order to complete the game. 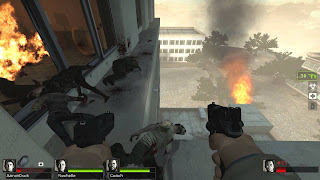 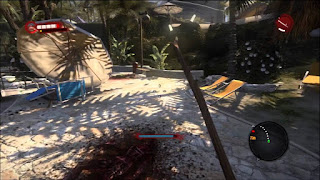 Codes and conventions are guides that most games of a similar genre follow and are usually related to the visual aids and elements within the game, such as the heads-up display, or HUD. A lot of these are based off of semiotics, which is the study of the meanings of signs and symbols and how that perceived by people who see them. As an example, in a lot of games that show a health bar for players, it is generally shown by a green bar that slowly changes colour depending on how much damage the player has taken, usually to red. This convention is kept to in Left 4 Dead 2 where you can see in the image clearly that the characters with the green life bar are healthy compared to the ones with a red health bar. Dead Island does not stick to this convention however and uses a white bar which is split up into chunks that disappear when the player takes damage, which is just another take on the general convention of health bars.

Both of these games include general conventions such as ammo limits and a HUD display to show the player, although in Dead Island you do not get guns until much later in the game, so the combat is very much based on melee combat using weapons that have durability that works in a similar way to ammunition as it limits how many types that weapon can be used, and also can be replenished by repairing the weapon in the same way ammo can be replenished by finding it around the map. Something that both games have in common is that they are both co-op based, meaning that you can play with your friends in order to complete the level, which is a bit different as co-op gaming has fallen out of fashion recently to be replaced with competitive gameplay. Finally, Dead Island differs slightly to Left 4 Dead 2 as it has an experience system in which you can level up and become stronger through the use of a perk system that will augment your character in different ways to help boost your skills, whereas Left 4 Dead 2 just has the player play through the game with the only upgrades you can get are finding the better weapons throughout the level and using them instead. My game will include a lot of these conventions, especially the health bar and ammo display for the HUD, along with including some jump scares to keep with the convention of the horror genre that my game will be.

The target demographic is who you are trying to appeal your game to and can be based on many factors such as age and gender. In general, if you are trying to appeal to a younger audience it is better to use more cartoon styled artwork and design, whereas a more photo realistic approach is generally more appreciated by an older audience. It is important to know who you are appealing to by doing market research to find out how to market your game to your target audience, or you may end up in a situation where people who wouldn't be interested in your game have seen all of the advertisements, and people who would really enjoy your game know nothing about it. For both my game and the two games that I have looked at, the games are aimed at older consumers, and generally leaning towards the male gender due to the content of the game being a shooter against zombie-like beings, which is more likely to be played by a male audience than a female audience.
Posted by Unknown at 06:31